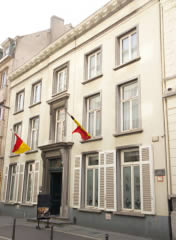 A description of the "DE PLATE" is not possible without a word about the museum.

The highly rated collections of the museum were started when alderman A Liebrecht took the initiative to let an old shop in the Kerkstraat in Ostend and opened an folklore museum. The building was demolished in 1902 for the purpose of extending the adjoining primary school named: Albert School.

The museum was relocated in a building in the Maria-Hendrika Park which also housed the curator. 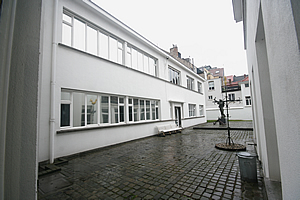 The museum was dosed down when the Great War started in August 1914 and did not reopen until 1932, which to say the least, were not the most prosperous years (Or the museum collections.

On Whitsun 1932 the museum was reopened,. yet again in a new location, this time in an old fortress, the so called "Fort Napoleon", under the drive of the town archivist Carlo Loontiens.

However, the start of the Second World War, in May 1940, was the spoil-sport. Due to the occupation of the fort by German forces, the museum collections had to be moved out They were stocked in the cellars of the then new Ostend Courthouse. 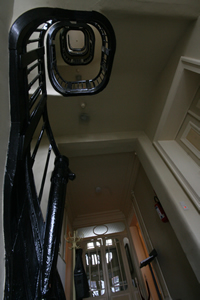 Town archivist and later co-founder of the Historical Society. Frank Edebau, in 1948 opened on basis of the collections, a small museum in the Royal Gallery (Koninklijke Gaanderijen). This again had to be soon vacated when the reconstruction, after war damage, was commenced. The collections were then initially stored in the attic of a school in the Witte Nonnenstraat. When this was taken in use again after repair of war damage, the collections had once again to moved, and were stored in an old warehouse on the waterfront of the old commercial basins.

There exposure to the bad weather elements and "loose fingers" took their toll. 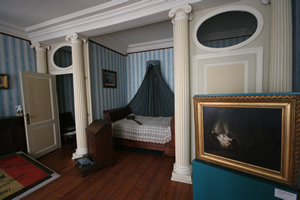 Knowing of the eminent demolition of the theatre and adjoining buildings, to dear the way for the erection of the "skyscraper": "Europacenter", the collection had to move again. This time the town council allocated space on the second floor of the new Town Hall, where, in 1966, the museum reopened for the fifth time. 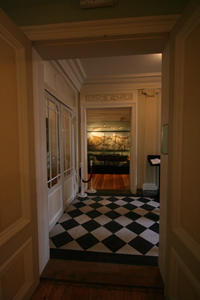 In 1970 the museum was relocated again, this time to the first floor of the Cultural Palace in the market place. However, to the dismay of the society, on the 10th of January 2000, the museum had to close its doors, and the collections removed from the building.

The seventh chapter in this century old story was commenced, when the town council, on the insistent demands of the society. rented the former royal residence in the Langestraat 69, and assigned the building to the Historical Society. for the purpose of housing the historical museum. After many difficulties , the museum was opened to the public on Saturday the 9th of February 2002.

The museum is still in full development. As yet only the fishery section, carts and borrows, Ostend historical, the "fisherman's public house" and "fisherman's family dwelling", is open to visitors, as well as the former "night accommodations room", where the first queen of the Belgians died in.bed in October 1850. The general management was formally lead and directed by Mr. Norbert Hostyn, art historian and curator of the town museums, until 2008. From 2009 .the cultural department of the town council took over. The daily running of the museum is in the hands of the Royal Folkloric and Historical Society De Plate.